Podcast heaven is now a place on Earth with Player FM 4.0, which has just begun rollout on Google Play. The app sports a completely redesigned interface optimized for your podcast pleasure and productivity … say goodbye to the old side menu and hello to the new bottom-navigation panel. With 4.0, we are introducing paid upgrades with a bevvy of new features, and there are also many new features launching for all users.

The most noticeable update is the new bottom navigation panel featuring 5 tabs. The all-important Shows tab is in the middle with your subscriptions, and it’s flanked by Discover, Downloads, your Play Later playlist, and Settings. The side menu is no more, as its main navigational items (Shows, Downloads, and Settings) are now part of the core navigation. The other items (Import, Help, etc.) are now available in Settings, which is a predictable and standard convention. 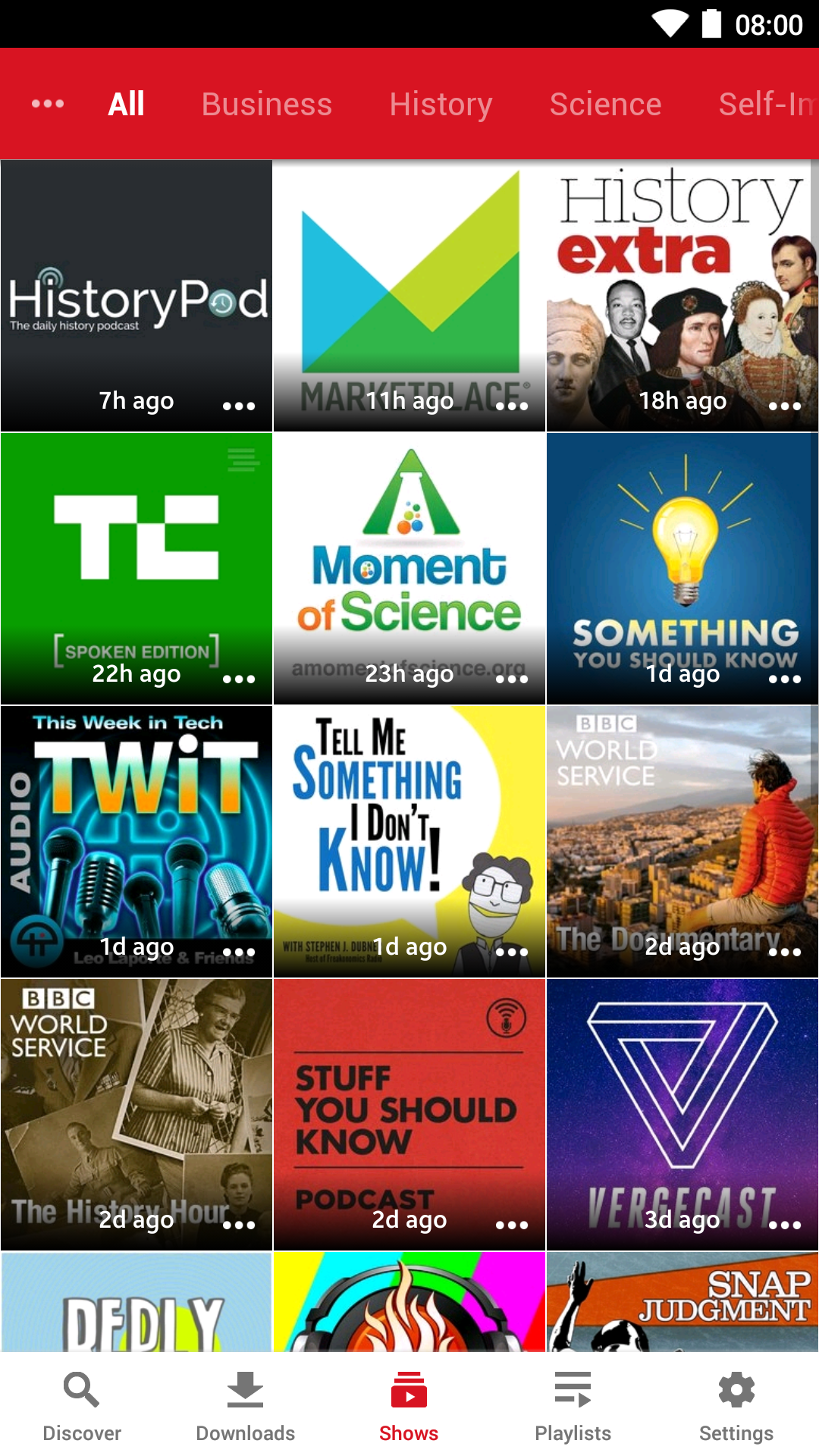 We don’t make such changes lightly as we know it can cause frustration and confusion to some users (for other users, such changes admittedly light their eyes up in glee). Plus, we’re far too laser-focused on pushing forward the whole podcasting space to make interface changes just for the sake of it. So why put in all the effort to make a new navigation model? It actually brings several benefits:

As part of this redesign, the settings screen got a heavy upgrade too. You’ll now enjoy access to three popular toggle controls directly on the top of Settings: Show downloaded only, Show played, and Force offline. Users have often requested faster access to these features and this was a nice side benefit of the upgrade. There are also new tabs here for Help and About, and Import has found its way onto Settings too, with some new features described below. 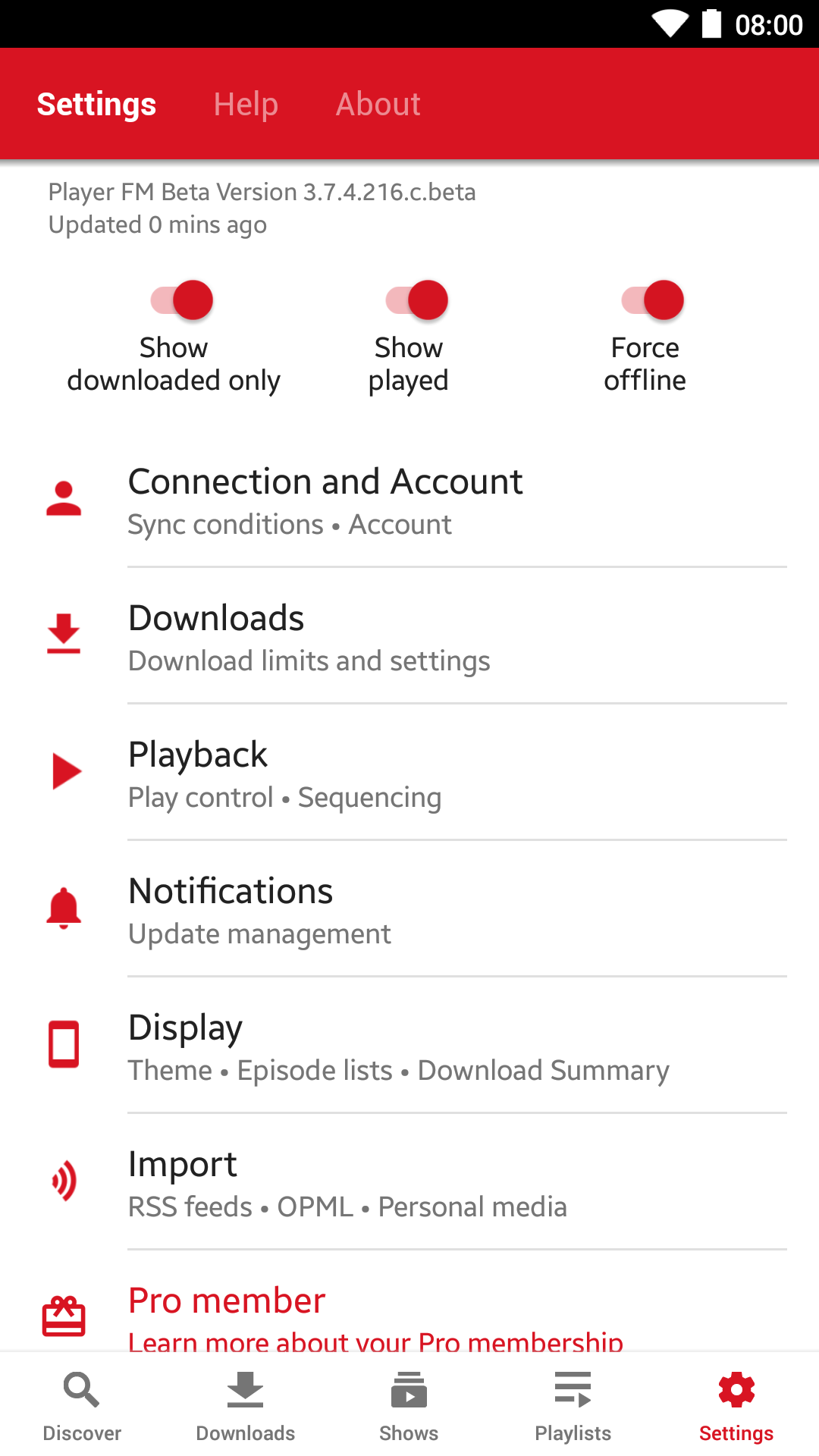 It’s an important part of our mission to make podcasts as accessible and freely available to all. We have no plans to charge upfront and we want to avoid display ads as much as reasonably possible. Therefore, as announced earlier this year, we will be funding future development and server costs with premium memberships. 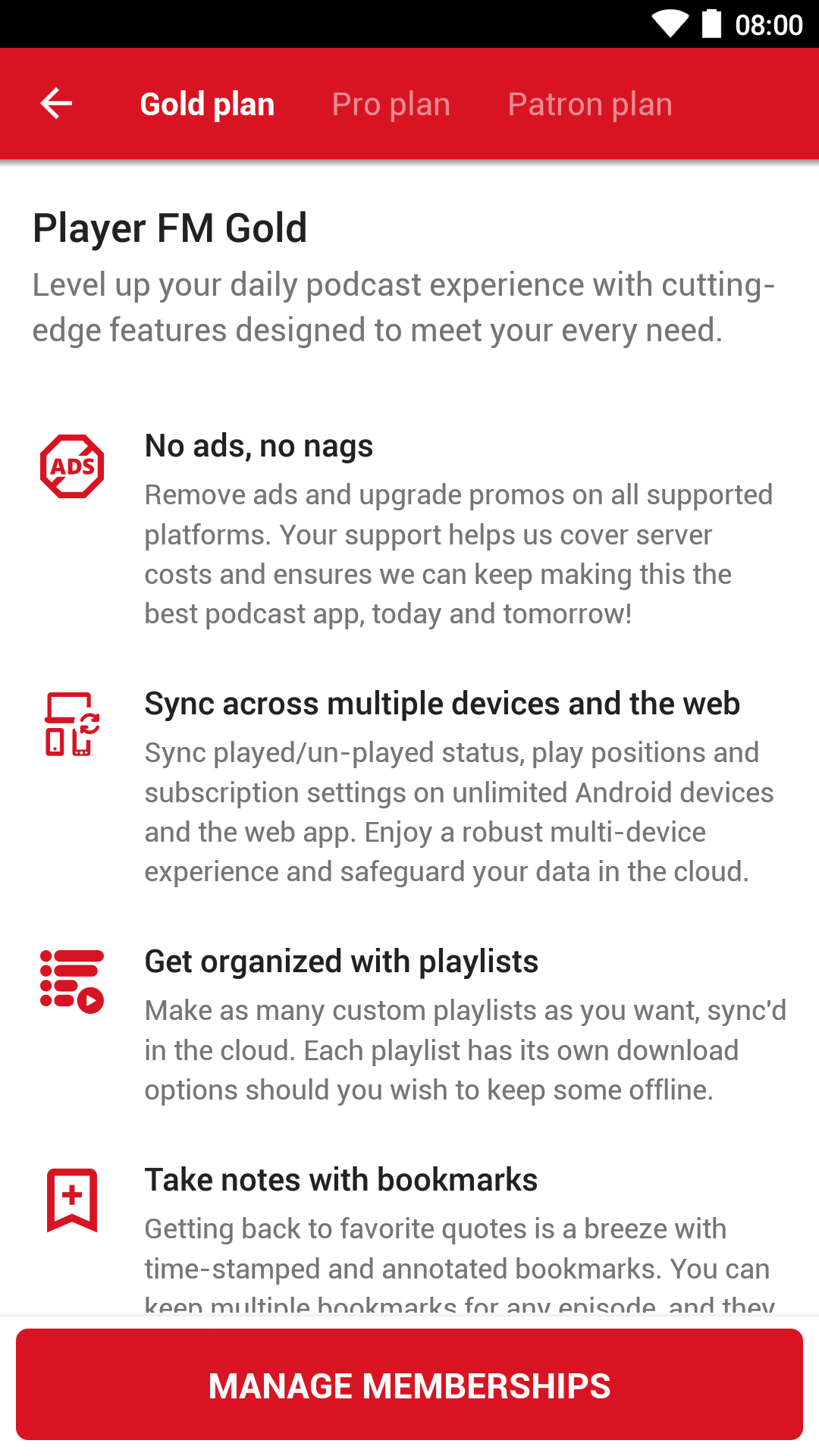 These are recurring subscriptions because we feel it’s a false economy to charge one-time upfront fees in an era where people expect continuous upgrades and 24/7 server operations. At some point, the burden of supporting existing users becomes overwhelming unless they’re paying a small amount on an ongoing basis. Fortunately it’s now easy to take payments inside the app with just one tap, and with Google recently dropping their fee from 30% to 15%, it’s possible to keep the subscription price affordable.

After much open design and evolution within the fabulous beta community, there are now over 100 paying beta users, to whom we’re tremendously grateful. Based on their feedback, we’ve converged on a set of plans which we believe should work well for all users. The tiers are Patron, Pro, and Gold, and will be offered as annual-billing rates of $9.99/month, $3.99/month, and $0.99/month respectively, with monthly-billing rates also available.

The Patron plan is a patronage model for people who like our approach to podcasting and want to help support it. Similar to a Kickstarter project, patrons receive perks as a thankyou, such as on-demand content recommendations, priority support, insider access, and exclusive updates. We have plans to work with publishers in the future to make this a more conventional plan, but for now, there’s no pretense that this is a plan for supporters of the app. The Pro and Gold plans are more conventional plans, packed full of features. Pro has all the features of Gold, plus cloud-intensive features catering towards people who are serious about podcasting.

Let’s look at the new premium features in detail. We’re excited to be bringing many of these to the podcasting world for the first time! The following are available on all plans: 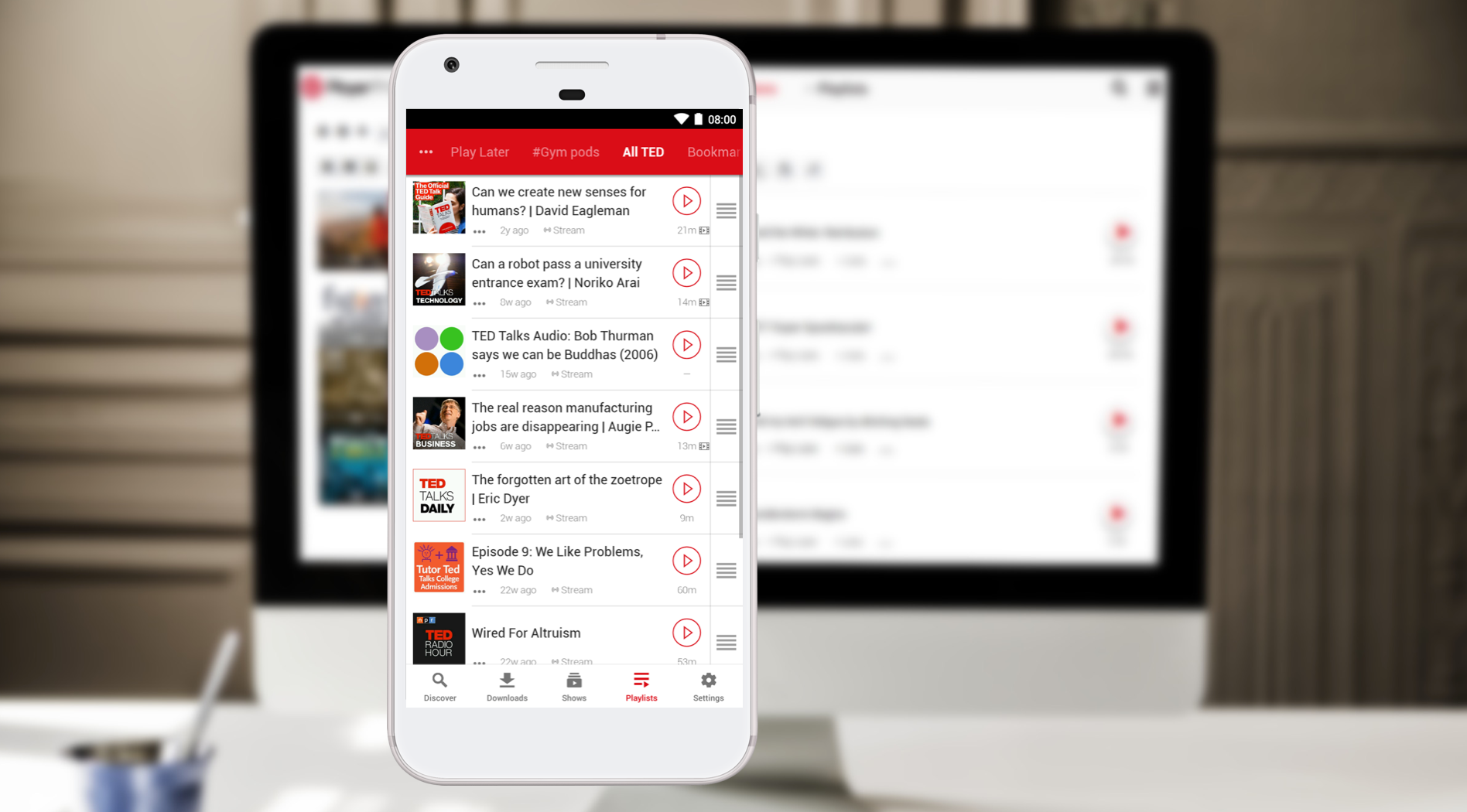 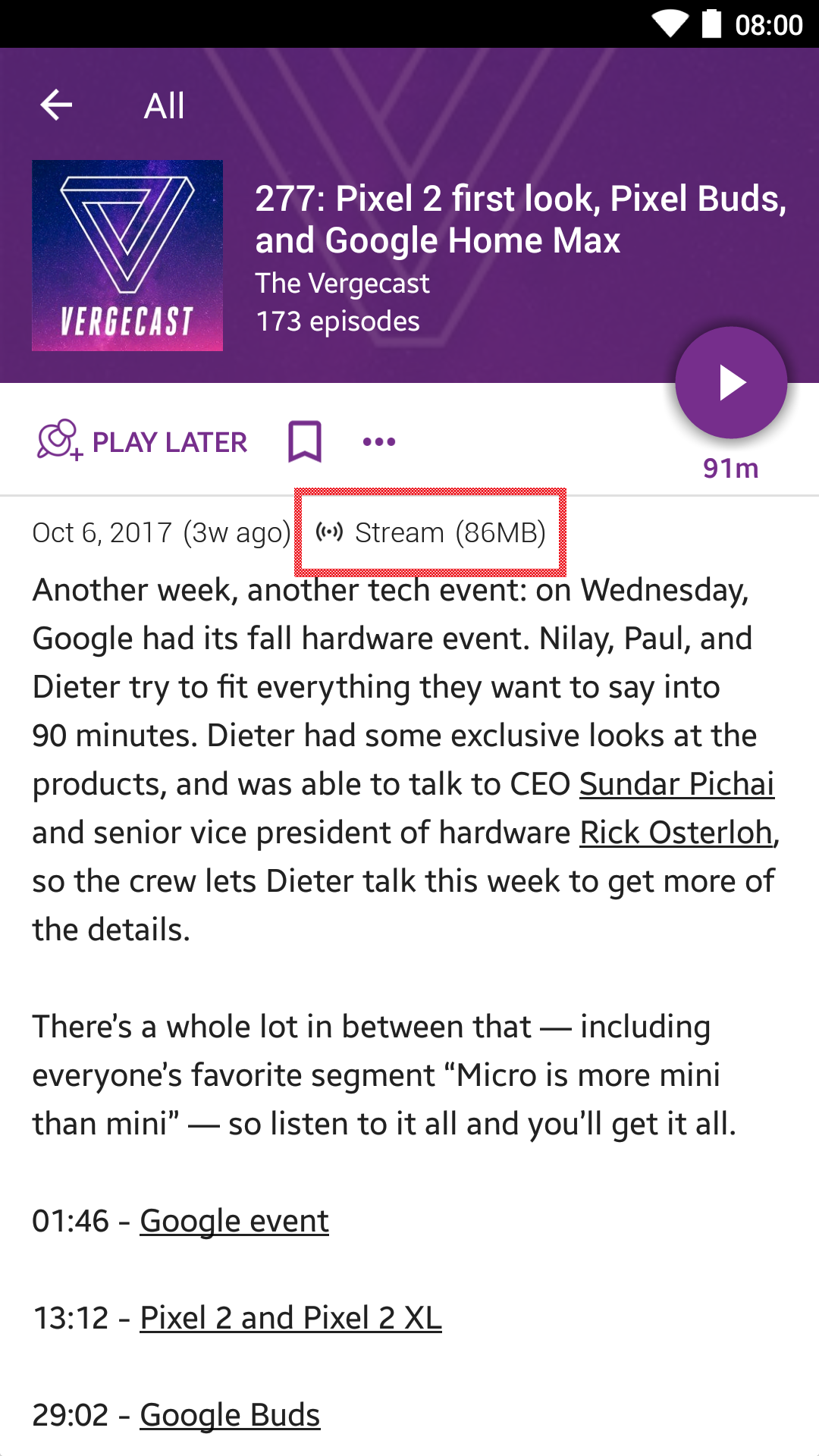 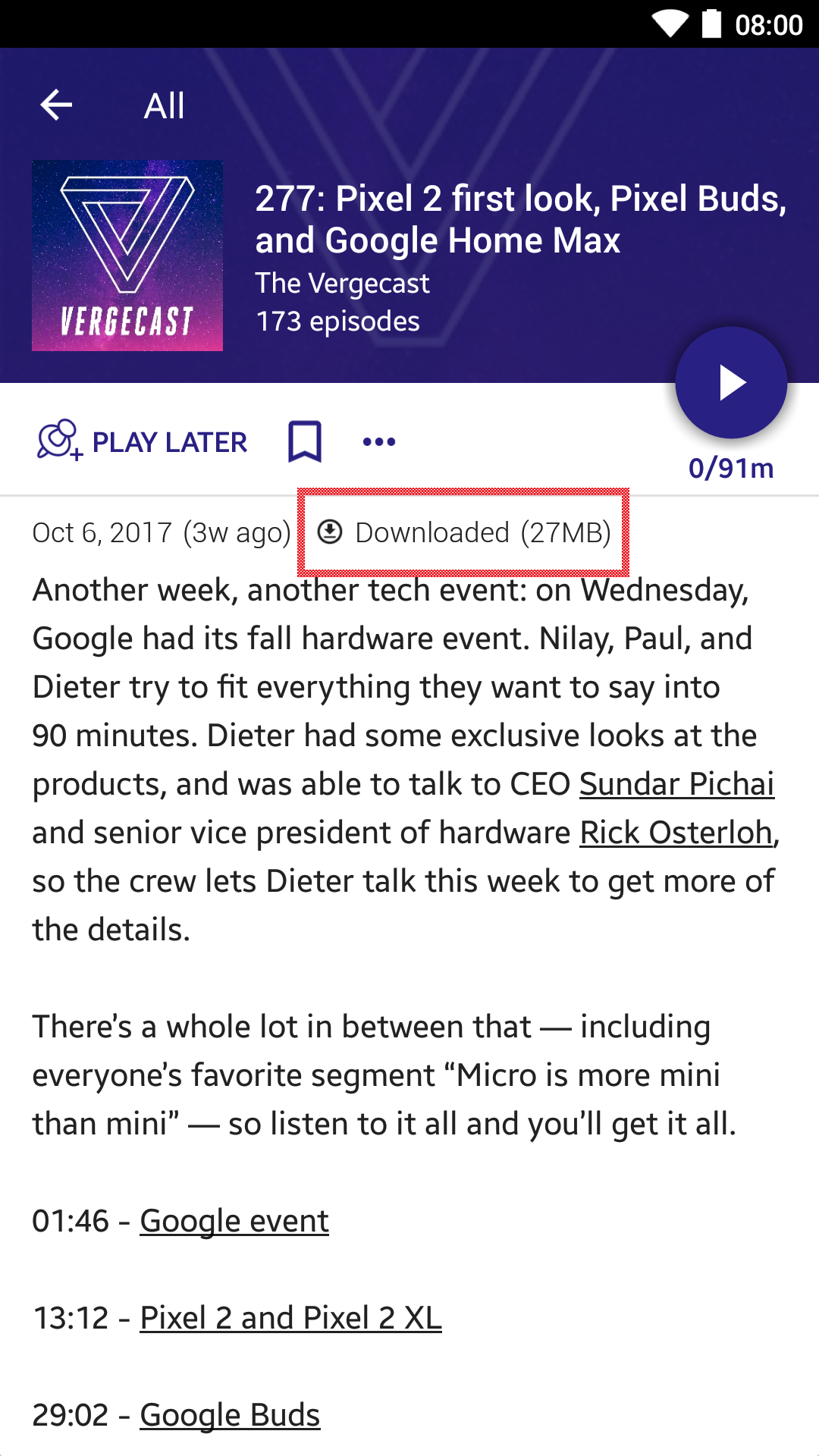 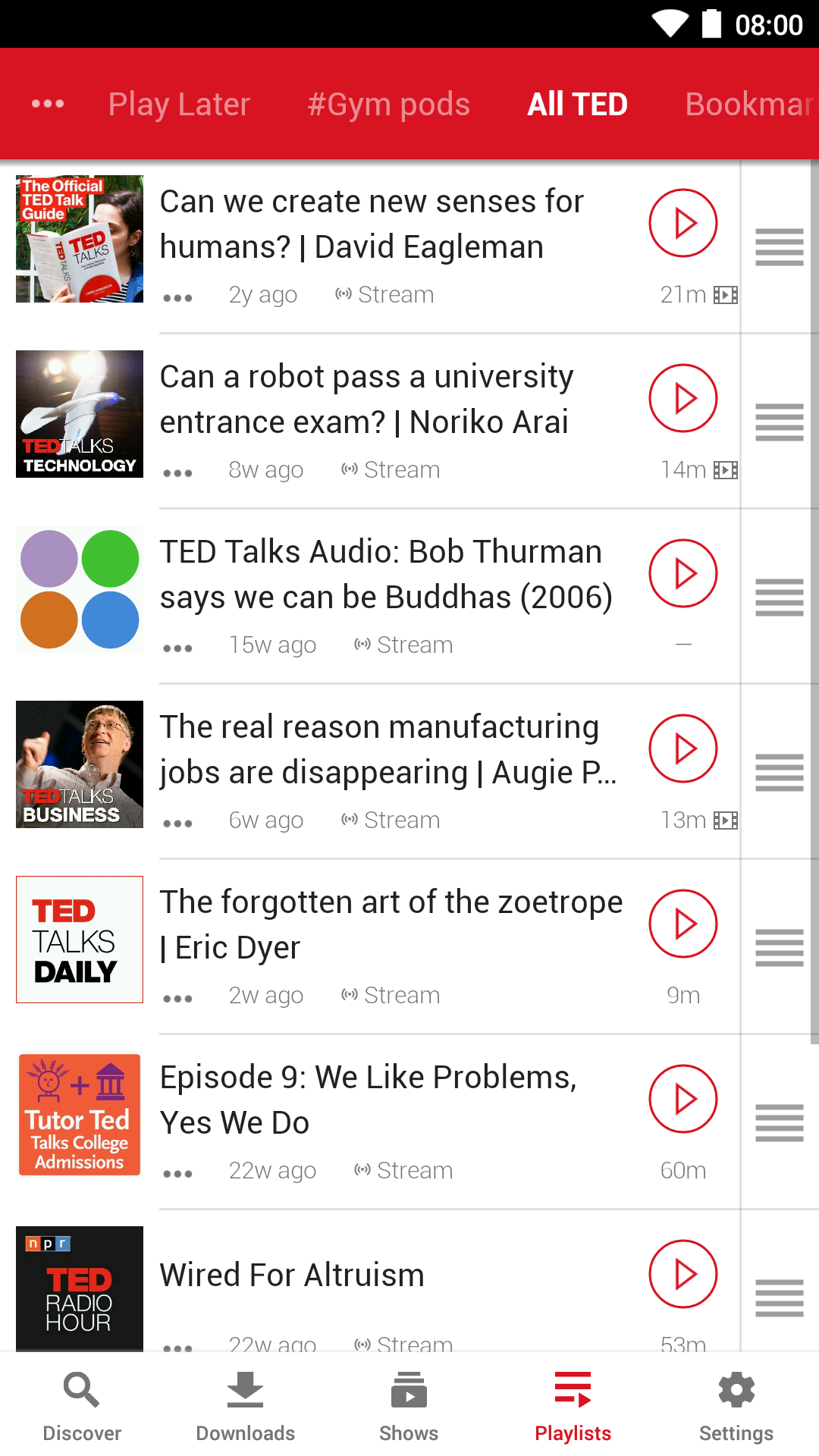 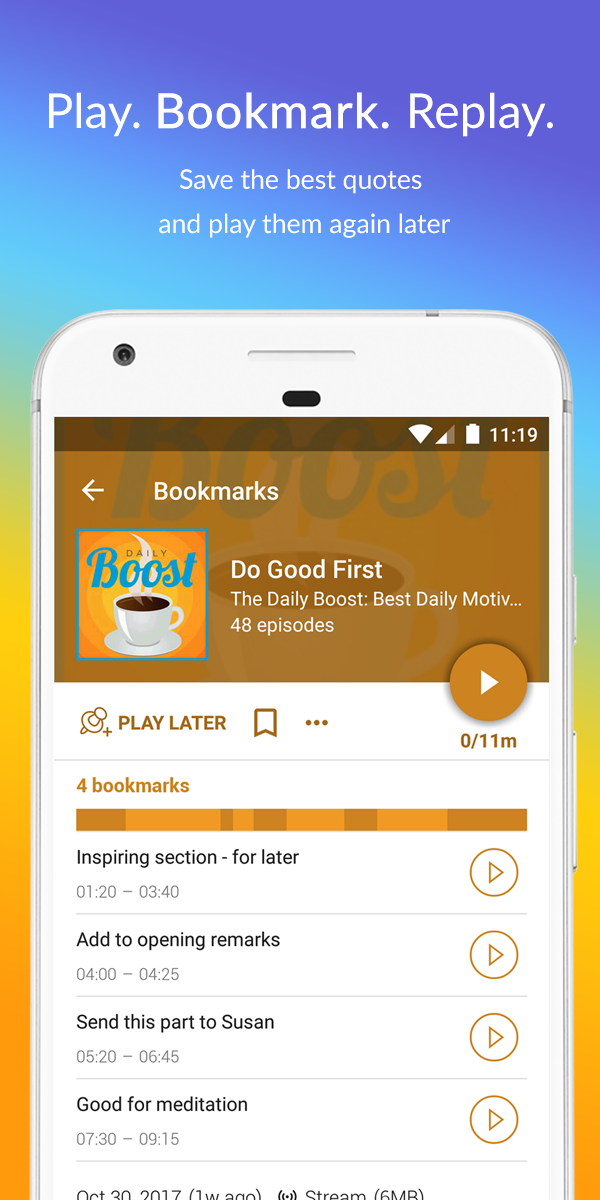 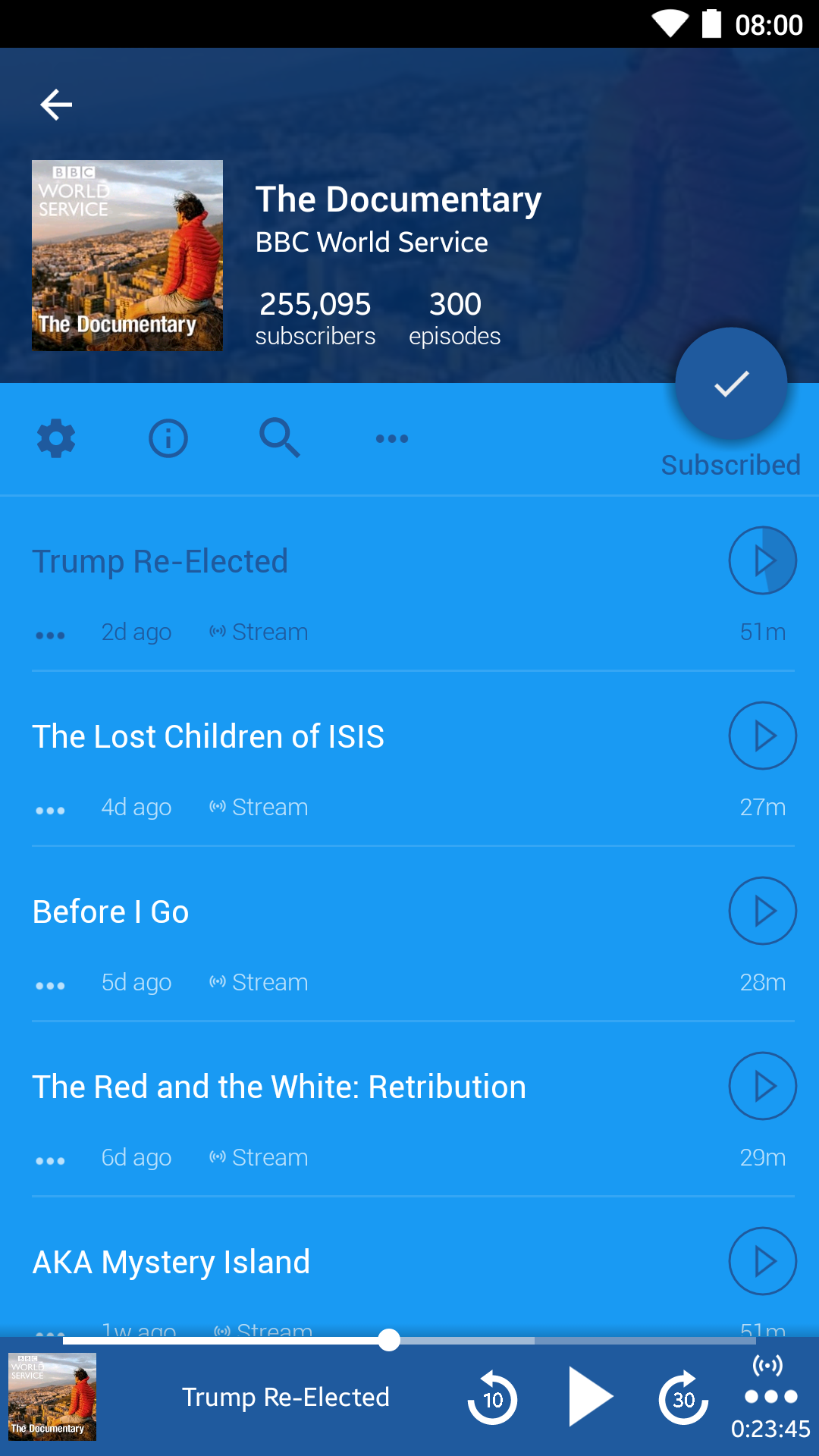 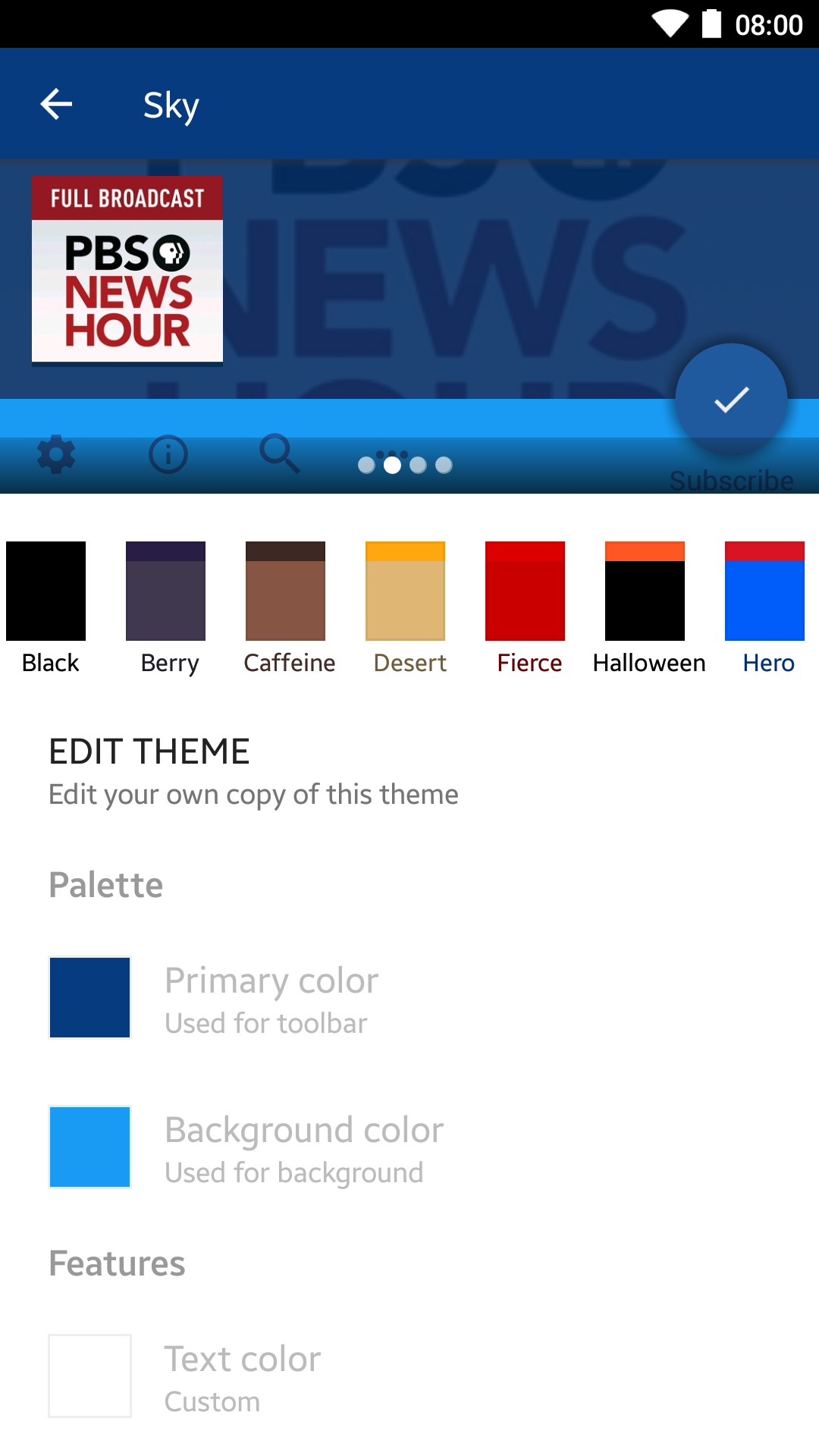 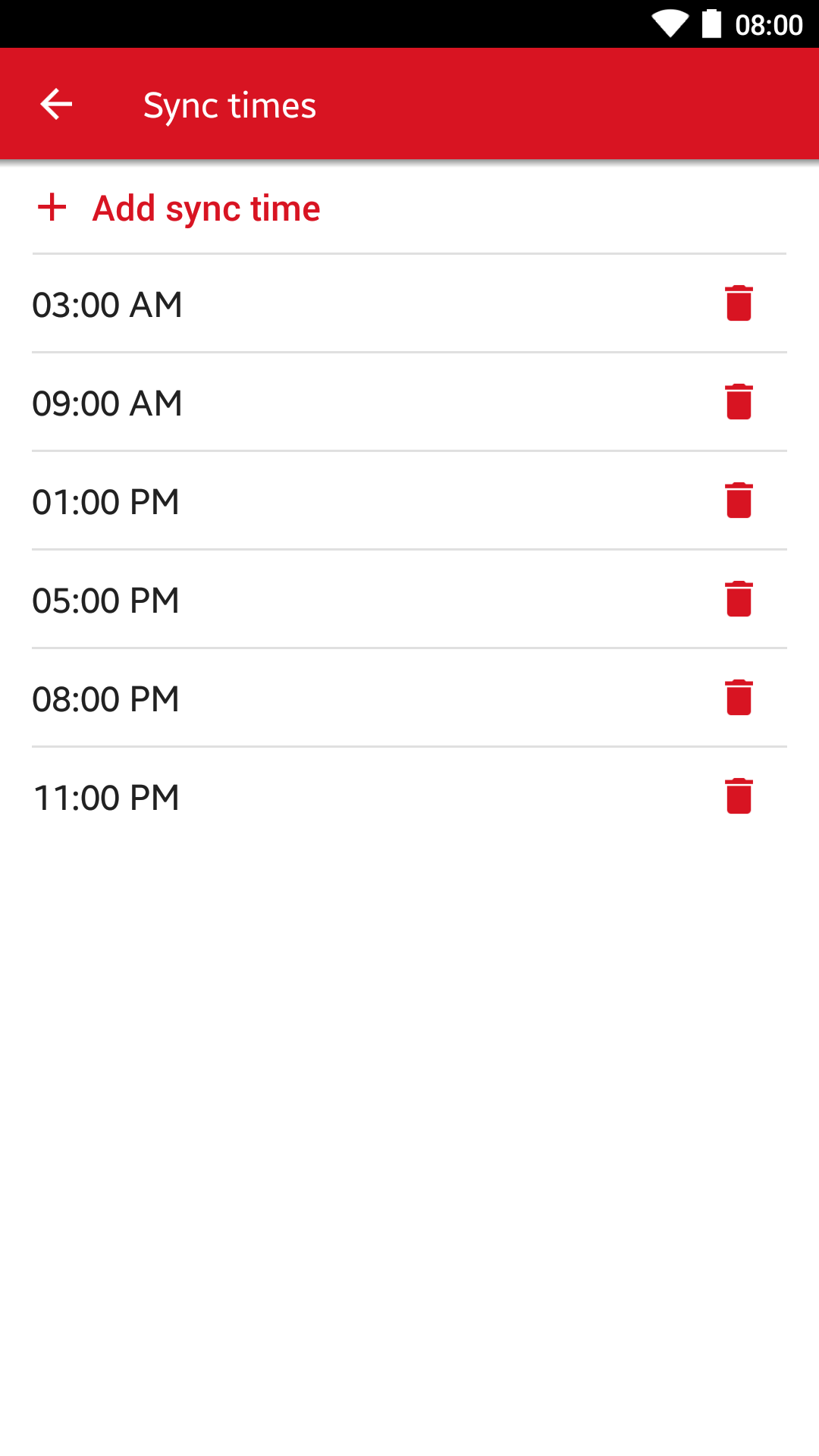 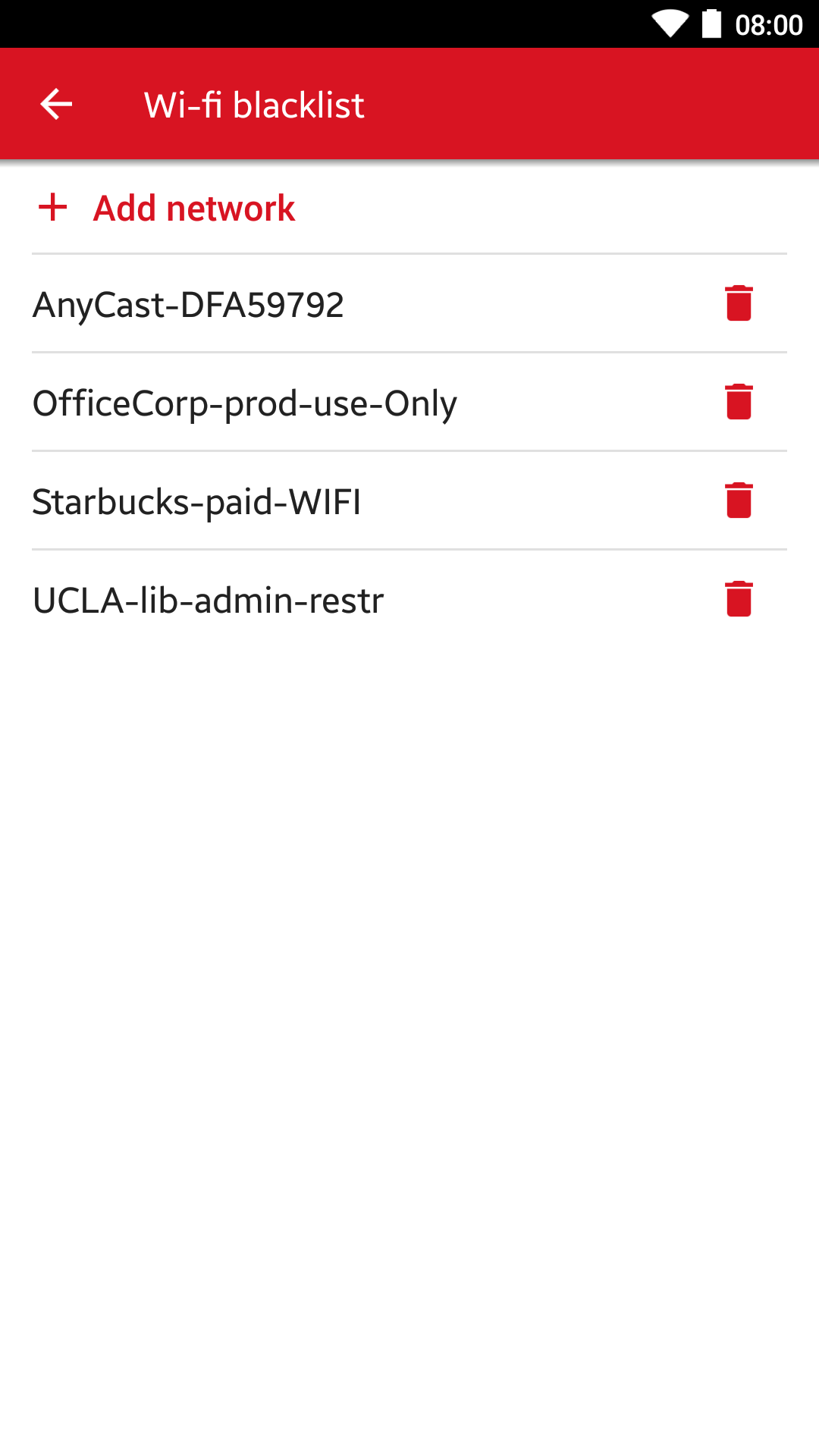 The Patron Plan, while primarily a patronage membership for now, does add several perks as a thankyou:

Premium memberships are available via Settings. You’ll find full info there and preview screenshots by tapping on each feature. For users who have premium memberships, the plan description will transform into an interactive tour to help you make the most of your upgrade.

As far as display ads, our stance is simple: to the extent we can avoid them, we will. One thing’s for sure: we want to make these memberships a genuinely premium experience, not just a “pay to remove ads” model. That said, the app will still show messages in certain contexts to promote the premium plans, which can be a trigger for people to upgrade.

We do intend to experiment with some advertising, to the extent we can keep it secure and unintrusive, as a way to keep the app sustainable for users who don’t upgrade, and no doubt as a reason for some users to learn more about the premium plans on offer. It was avoided up to now because we don’t like the idea of forcing ads on users who have no way to remove them. But we’re more open to a modicum of advertising now that there’s an affordable way for sufficiently motivated users to remove it.

And much more in Player FM 4.0

If the UI redesign and premium features were not enough, there’s even more upgrades for you in 4.0. 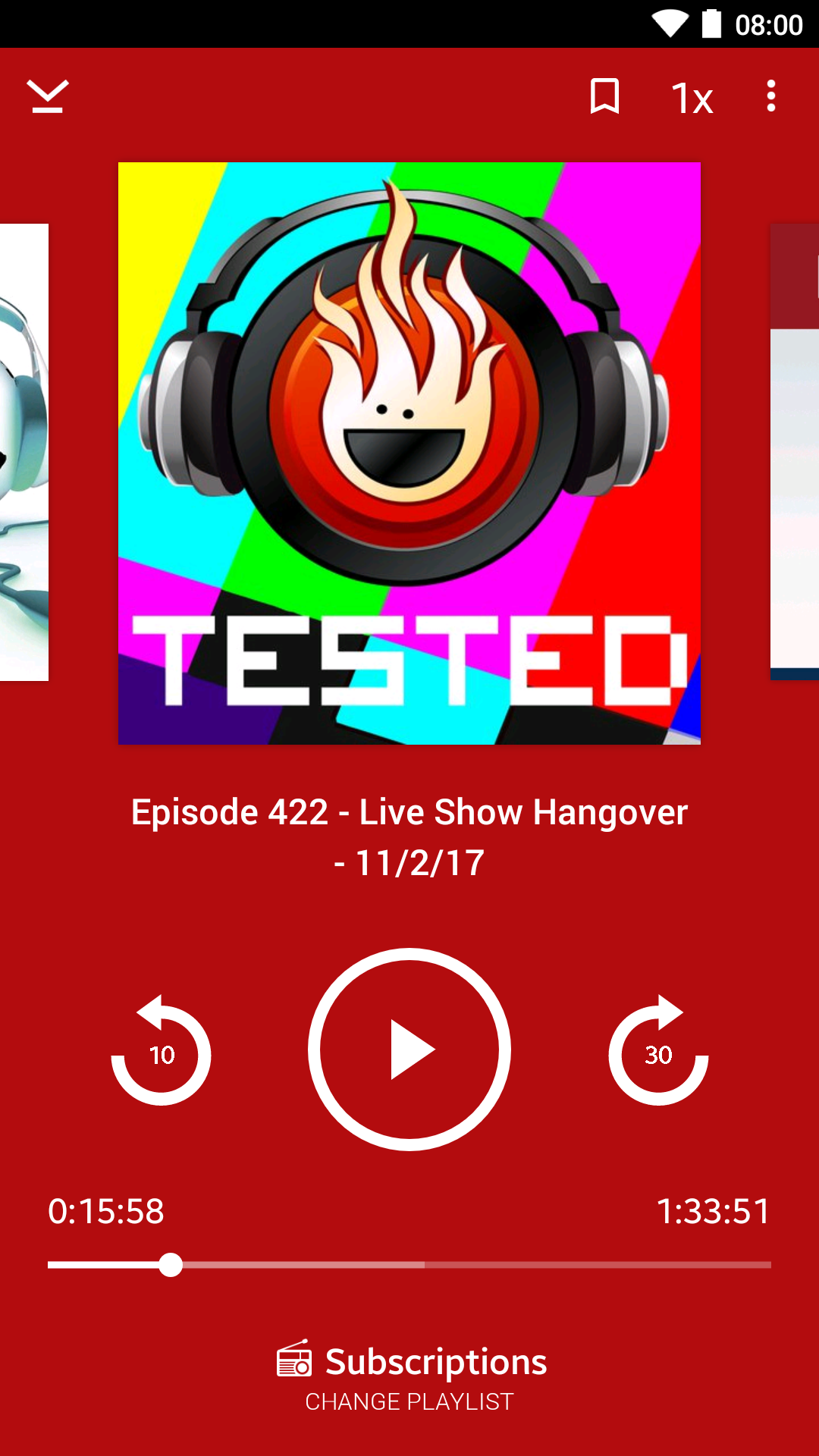 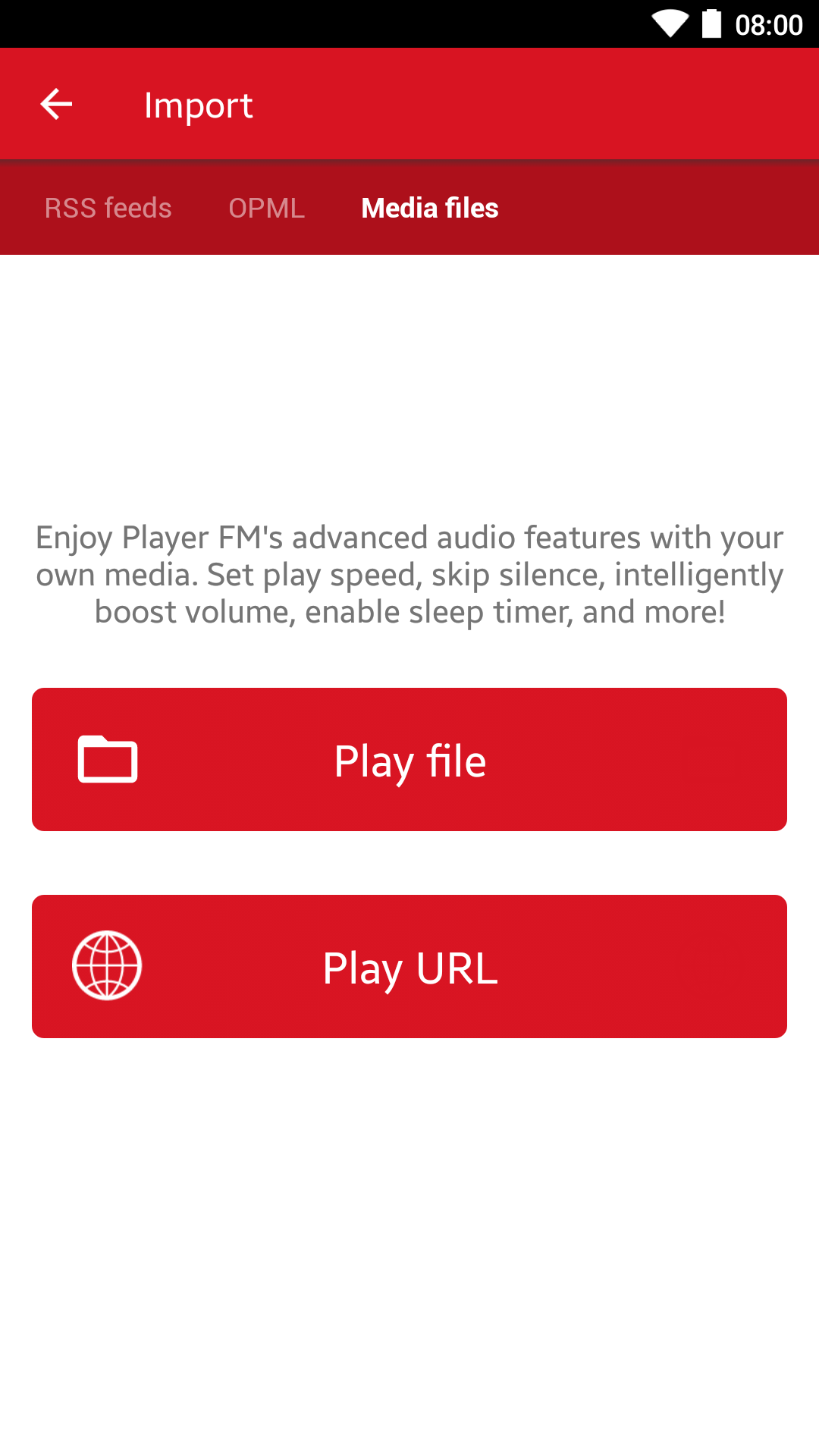 Download Player FM in the Google Play Store now! With an update this big, we’ll be rolling it out to all users over the next 2-3 days. You can opt into the beta on the Play Store should you want it without delay. 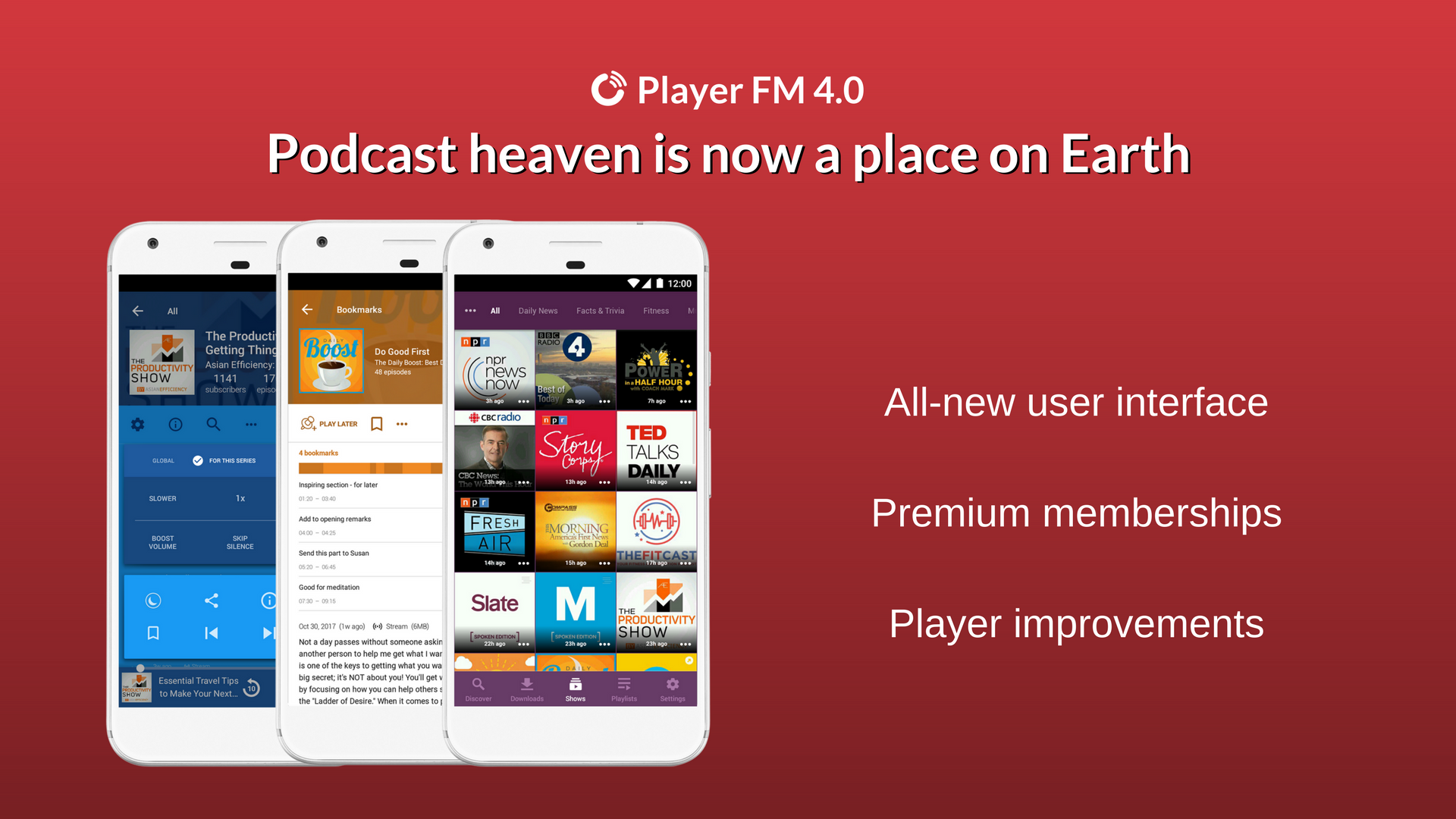